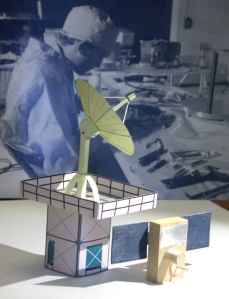 One of the things I’ve always enjoyed about my job is sharing what I know in a teaching capacity. From rocketry, satellite design, Earth observation, space radar, orbital mechanics, propulsion and space debris, to solar power systems and mission design, I have had the pleasure of teaching university students and people in the space business around the world. In addition, some of my youngest learners were only 7 years old, and the wooden satellite model (above) was part of the kit that a keen group of junior rocket scientists assembled during one of their classes.

Models are a great way of learning how things fit together and being able to highlight the various technical aspects of the “real thing”. In the process of designing and constructing actual satellites, a life-size and small-scale model of the real thing is not only extremely useful in the planning stages, but also nice to have as a memento once the spacecraft has been launched. It has been fun to design paper model kits of many of the spacecraft I worked on that are now all orbiting the planet, while the paper groundstation antenna (also above) is a 1:40 scale model of the real thing here on Earth.

Another aspect of space education was recently brought back to mind when Marianna exclaimed she had just seen me on this “Coast” documentary! It has been some years since I took part in this particular BBC documentary about the UK’s very first satellite, Prospero, to be launched on a British rocket (a Black Arrow rocket, in 1971). If you’re planning on watching the documentary, the part about space starts at around 42 minutes, and yours truly appears around 51:20.

This site uses Akismet to reduce spam. Learn how your comment data is processed.